Dante Alighieri once said, “Nature is the Art of God.” One either loves wildlife, or they don’t. If they do, then that alone explains their interest in wildlife art; in the case of those that don’t, hopefully, the beauty of wildlife art will be able to alter your convictions a little.

What Is Wildlife Art?

Wildlife art can be described as art that involves wildlife. This art is created to either make scientific observations about animals in their natural habitat to display the beauty of the animals around individuals, or to open one’s mind to their own philosophical ideas about their connection to these animals and what lies beyond this connection.

For many artists, painting wildlife art is not a process of composition and abstract shapes, it is work that takes on a more realistic depiction where the artists themself has played as a witness, cautiously imparting their own unique emotion, color, style, and composition into their wildlife art.

What results from wildlife art is a relatable, genuine, and down-to-earth creation. Above all else, wildlife art is a form of environmental awareness with many lessons to be learned from it. Through artistic endeavor, wildlife art merely promotes more thought regarding the animals of this earth.

Some of the earliest artists used animals as their principal subject portraying how they were vital to these artists’ very existence. These paintings were found deep in the walls of caves when illuminated by the flickering light of oil lamps and fires. The true reason for these images remains unknown, other than the mere fact that they must have been very important to their creators.

However, what is known is that these drawings happened to be full of understanding for the living animal. They were created by artists who knew their subjects intimately. In fact, the very survival of man at the time was dependent on the skills of the hunter for survival.

Animals that provided clothing, food, oils, and more are sure clues to the reason and better yet, the importance of this art daubed on the ceilings and walls of caves where these artists and families once lived.

The Transition from Symbolism to Science

Even during the Middle Ages, animals continued to have a place in art. However, they were treated as symbols that often appeared in religious works. Wall paintings and mosaics in Roman settlements, such as Pompeii, featured many creatures, but it was not until the fifteenth century that animals were considered a serious subject for artists.

Scientists who began to study animals in the natural world needed illustrators to depict their findings of skins and drawings. Leonardo da Vinci, Andrea Mantegna, and Albert Durer were artists who were deeply interested in the world around them.

They all made fine studies of these animals, and almost a century later, canvases filled with exotic landscapes, birds, and domesticated fowls were done by artists such as Melchior d’Hondecoeter and are to be seen in private collections.

In the late sixteenth and seventeenth centuries, it was from the more scientific approach that wildlife art as we know it today developed. Natural history writers needed to find ways to illustrate the species being described and classified.

Over time, artists started to break away from the stifling tradition of using illustrations to express their ideas about wildlife. Instead, they started to use wildlife as a subject to express ideas regarding composition, design, pattern, and color. From a photographic perspective, these artists were no longer concerned with trying to get every detail right.

This is how the division of wildlife art came about. Traditionalists wished to represent their subjects with photographic precision, whereas artists, who were already familiar with other branches of art, wanted to explore other approaches. 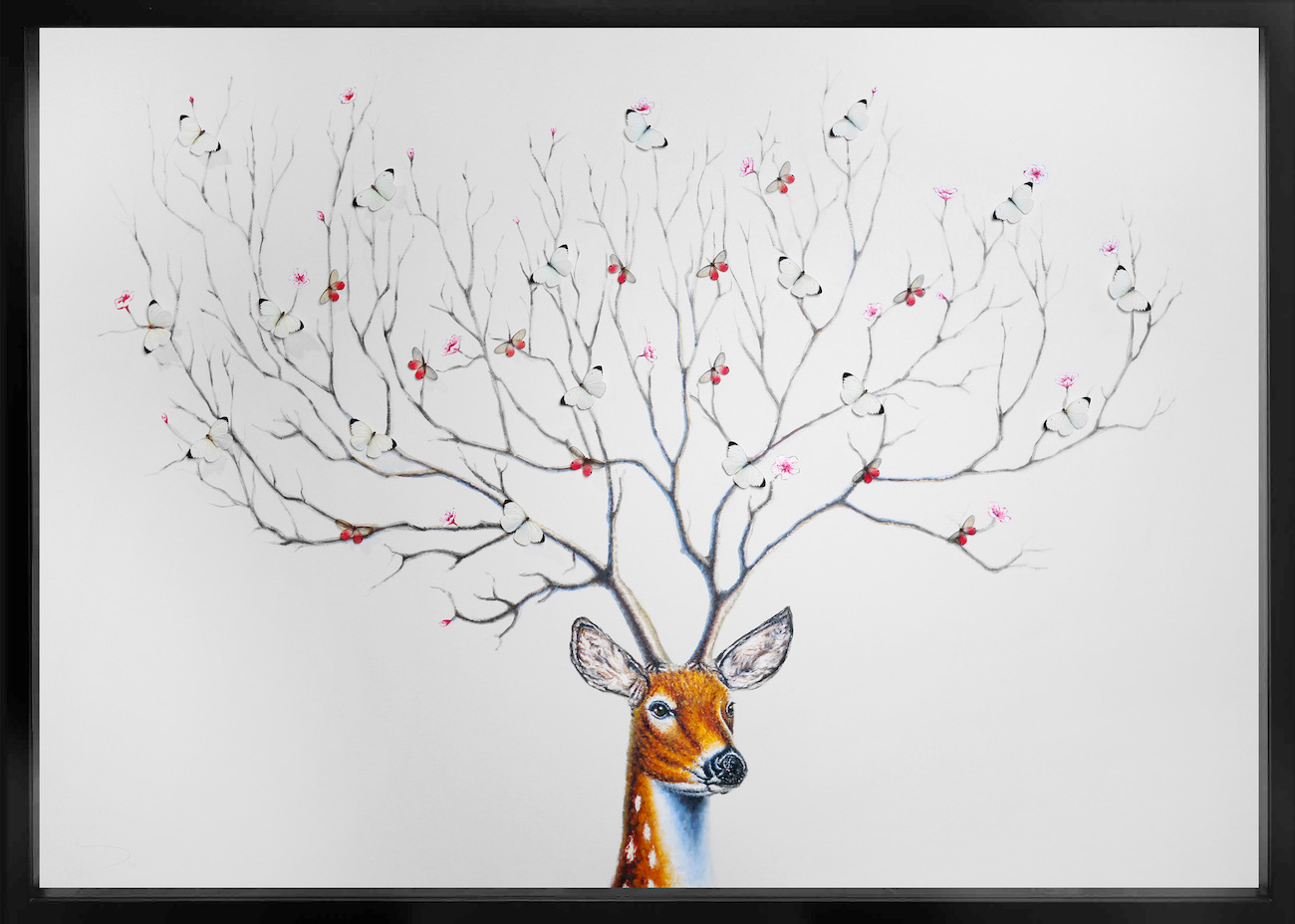 SN is a pseudonymous artist with trademark works that employ a plethora of butterflies, ultimately navigating the relationship and struggle of nature with man. Working with media such as charcoal and pencil, SN creates background images of animals that then affix a melody of brilliantly colored butterflies. This adds vibrance that allows this artist to infuse his works with a playful spirit.

The butterflies symbolically enhance works of happiness, love, rebirth, and transformation. Investigating opposing ideas, for example, delicacy and durability, as well as creation and extinction.

Today, more than ever, especially considering the present condition of our wildlife, it has been of severe importance to understand and conserve wildlife and their habitats. Critically endangered species are on the verge of extinction, and soon, if not already, some will only be alive in paintings.

Artist SN draws his inspiration for his artworks from the beauty in nature. Art lovers and animal enthusiasts need to keep alive the symphony between artwork and life, as each inspires the other. The enchantment of wildlife art is not just found in the vivid color impressions, brushstrokes, or the life-like image itself.

The enchantment is also found within the vision of the creator, the artist who witnessed the masterpiece in reality before putting it on paper, or on a canvas for the world to experience a similar sentiment that the artist had during this encounter.

Wildlife art is timeless; it is more than just a mere abstract. It tells the story of the wilderness, and that alone is enough to keep it relevant among individuals, even in a world where digital art is taking over. The Earth just has so much to offer in terms of surprise and wonder that it is hard not to fall more in love with wildlife art each and every day.